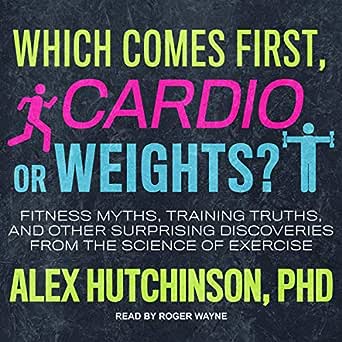 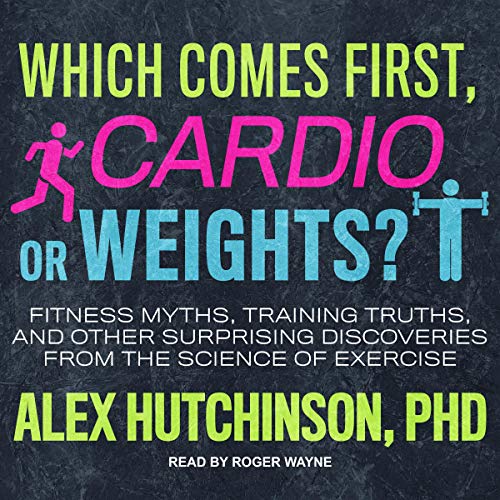 Which Comes First, Cardio or Weights?: Fitness Myths, Training Truths, and Other Surprising Discoveries from the Science of Exercise

4.5 out of 5 stars
4.5 out of 5
199 global ratings
How are ratings calculated?
To calculate the overall star rating and percentage breakdown by star, we don’t use a simple average. Instead, our system considers things like how recent a review is and if the reviewer bought the item on Amazon. It also analyses reviews to verify trustworthiness.

Jeremy Bee
3.0 out of 5 stars Some valuable insights but bitty and very focused on endurance sports
Reviewed in the United Kingdom on 11 February 2020
Verified Purchase
This deals with a lot of recent sports research in a very accessible manner. In some ways it's too accessible, since the author rarely discusses experiments in detail, and a lot depends on whether you think the author is authorative. I did, on balance, but I could be wrong. Because of the nature of the book - it clearly started life as brief newspaper columns - it also doesn't always make links between different areas of research and I
think many of the key takeaways will already be familiar to people who take even a passing interest in exercise (the move away from static stretching; the idea that you do need to do some strength training regardless of your main sport; the notion that the amount of sleep affects athletic performance)

By far the biggest problem for me, though, was the overwhelming bias towards endurance sports, and running in particular. I don't think this is entirely the author's fault. It is far easier to do good quantative science work with clear output variables (faster or further?) than with the messier, correlational world of multidimensional sports requiring different physical attributes, and I am sure the book reflects an unavoidable bias in sports science. Nevertheless, the author, a runner himself, barely considers a broader range of sports. Rowing and cycling (as endurance sports) are discussed several times, but often to support other studies on running. The demands of the world's most popular team sports however are barely touched on - there's a brief discussion of how football and basketball needing both endurance and speed (no shit!) but few practical tips about how to apply the science to amateur training - unlike the wealth of advice for runners of all levels. Coverage of other sports is even worse. Tennis and other racquet sports are barely mentioned and my own sport (martial arts) is not mentioned at all outside of a brief discussion of weight cutting - the author has little to say about these sports save generalities about diet, sleep, and recovery. Even discussions of core strength and skill acquisition (far more important in virtually any sport other than running) eventually return to takeaway points - for runners.

That's not to say it is a bad book, necessarily. Whatever sport or exercise you're doing, if you're relatively new and want to build on scientifically solid principles, you will find some of the advice applicable (and even motivational- he's unquestionably good on the general health benefits of exercise) and runners will find a lot of targeted advice regardless of their level - this is also useful for anyone looking to include aerobic exercise in their general training. Unfortunately, more serious athletes in strength or skill based sports may, like me, end up wishing the author was as interested in these areas as he is in running.
Read more
3 people found this helpful
Report abuse

MikeHotel
5.0 out of 5 stars High quality information presented in a very good Q&A format
Reviewed in the United Kingdom on 5 November 2015
Verified Purchase
If you're looking for an instructional guide then you will be better served elsewhere. Instead, what this book does is take a series of questions we've probably all asked at some stage and presents a comprehensive answer to each in plain English.

If you've ever ventured online for sports science information and advice then you'll probably agree the wheat to chaff ratio is very poor. By contrast the references section at the back of this book is 36 pages long.

You can get a very good idea of what the book is like by reading the preview pages on Amazon. This is one of those books you can read cover to cover and then keep on the shelf as a reference. Highly recommended.
Read more
10 people found this helpful
Report abuse

S. Padazis
5.0 out of 5 stars Excellent review of the studies of scports science by a read scientist (Physics PhD and all)
Reviewed in the United Kingdom on 31 October 2018
Verified Purchase
In his book excellent book, Alex tries to answer all the qusestions about training using ONLY the scientific evidence. Some of the myths you might have heard in the field, in the track and in the gym will be debunked. Highly recommended if you are serious about training.
Read more
Report abuse

champion the wonder horse
4.0 out of 5 stars good book. interesting read.
Reviewed in the United Kingdom on 8 May 2016
Verified Purchase
Well worth a read. Q & A format and pulling together a lot of sources (the references take up quite a lot of space at the end!).

Confirmed some of the things I've noticed; and gave me some useful info on areas where I've been going wrong.

An easy read too. Anyone doing any amount of fitness should find something of interest here.
Read more
Report abuse

Big bob joy love
1.0 out of 5 stars Yawn, boring useless garbage, feel asleep it was so boring
Reviewed in the United Kingdom on 5 July 2018
Verified Purchase
Feel asleep reading it, useless garbage.
Read more
Report abuse
See all reviews
Back to top
Get to Know Us
Make Money with Us
Let Us Help You
And don't forget:
© 1996-2021, Amazon.com, Inc. or its affiliates