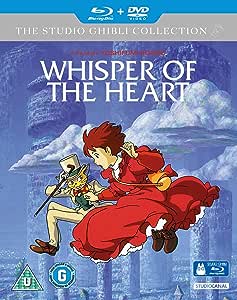 Whisper of the Heart

Classic anime feature from Studio Ghibli.Shizuku is a young schoolgirl dreaming of becoming a writer.When she goes to her school library for inspiration, she finds that all the books she wants have already been checked out by a boy called Seiji.As Shizuku dreams about what this boy could be like, sharing the same literary tastes as her, she starts to bump into an obnoxious new boy at school.Could they both be the same person?
Technical Specs: * Languages(s): Japanese
* Subtitles: English
* Interactive Menu

4.8 out of 5 stars
4.8 out of 5
1,571 global ratings
How are ratings calculated?
To calculate the overall star rating and percentage breakdown by star, we don’t use a simple average. Instead, our system considers things like how recent a review is and if the reviewer bought the item on Amazon. It also analyses reviews to verify trustworthiness.

D. Wheeler
5.0 out of 5 stars Studio Ghibli's best
Reviewed in the United Kingdom on 5 May 2016
Verified Purchase
There's little I can say that not already been said. I looked at some of the negative reviews and despaired at some of the comments. If you put forward a comment along the lines that "it's boring" with nothing to add, then you will only attract equally boring and negative comments in return. This is a film that encourages you to think about relationships and captures a moment of "Magic" when two young people realise that they are spiritually connected and subsequently commit to each other at an early age. The story is told in such a supple way that, before you realise it, you are completely hooked and care deeply about the characters (something that only the best films will achieve).
My litmus test for any animation is, whether or not I forget that the film is actually an animation because I get caught up in the story so much. In this case I forgot within 5 minutes.

Amazon Customer
5.0 out of 5 stars A fantastic and heart-warming masterpiece.
Reviewed in the United Kingdom on 26 April 2013
Verified Purchase
Yoshifumi Kondo was an animation director for Studio Ghibli, working alongside Hayao Miyazaki and Isao Takahata on the films Kiki's Delivery Service, Only Yesterday and Princess Mononoke, all of which are some of the best the studio ever produced, he was Miyazaki's protégé.
Whisper of the Heart is the first and only film directed by Kondo, unfortunately due to a sudden death said to have been caused by excess work.
It's a real tragedy because I felt like the film has a certain purity, Kondo had some proper talent and we'll never get to see anything like it again.

Whisper of the Heart is best described as a "slice of life" film, there's real people with ordinary lives.
The story follows Shizuku, a hardworking teenage girl and bookworm who lives with her parents and shares a bunkbed with her sister at a cramped and cluttered apartment in modern Tokyo, I found that most interesting because it isn't often you see characters in anime living in such poor conditions.
The first chunk of the film is a glimpse of her everyday life in school and home but it really starts going places when she follows a stray cat on a train to discover a beautiful antiques shop.
Shizuku becomes attracted to a boy named Seiji who eventually leaves for Italy to follow his dreams of violin making, Shizuku is then inspired by Seiji to follow her own dreams of writing.

It is just a fantastic and heart-warming masterpiece.

Netherfield4348
5.0 out of 5 stars Great little film
Reviewed in the United Kingdom on 8 September 2013
Verified Purchase
I bought this DVD for my granddaughter for whom I am collecting the Japanese Series of animated films. I have enjoyed them as much as she has. The entire production is terrific from start to finish whether it is the story; animation; colours - they are wonderful to watch - hence the collection. I would recommend this and many other stories to anyone who enjoys animated films. I have around 20 in the collection and all are different in their genre, but so interesting to watch. There are so many people involved in the production of each story but each is worth a viewing and enjoyment in doing so.

D. Lucas
4.0 out of 5 stars A good quality anime for all ages
Reviewed in the United Kingdom on 3 November 2009
Verified Purchase
A Japanese anime featuring an American country soundtrack sounds like a strange idea indeed, but Studio Ghibli have pulled it off with one of their most touching animated adventures ever. But unlike Spirited Away and Laputa, the magic and otherworldly scenes are few and far between - Whisper of the Heart is very much an emotional drama, with the heroine contending with real life obstacles such as studying and boyfriends, rather than monsters and wizards.
The song featured throughout the movie is Country Roads (Olivia Newton John's version plays during the beginning credits) and one of the most beautiful scnes in the movie is when the young girl performs her own personal version with the lyrics rewritten to suit her own experience, and the young boy who becomes her love interest backing her with his violin playing, and then his family joins in with their own instruments, and it swells into a beautifully performed folk track.
At the start of this movie, Western audiences may be thinking that it will be an American style teen movie with a gradutaion scene at the end - there are references to the kids' graduation throughout the movie - but it does not even reach the end of the school year (sorry to spoil it) it simply takes place over a few weeks in which this young girl explores her talent for writing songs and stories, and finds that her passion can be a burden as well as a gift. She encounters many characters who have a different impact on the way she feels about her talent, and she finds that she must learn her own way and make her own mistakes before she can follow the right path that will determine her future and career. Whisper of the Heart contains many strong themes that can appeal and inspire viewers of all ages, and is a must for any anime enthusiast.
Read more
3 people found this helpful
Report abuse

Joshua
5.0 out of 5 stars One of Studio Ghibli's best dramas
Reviewed in the United Kingdom on 14 June 2014
Verified Purchase
When it comes to the animation, characters, story and the messages, this is really one of their best films. I could relate and understand many of the characters feelings and motivations, especially the main character with her struggles. It's great to see more of a realistic approach to their films, even though their fantasy stuff is still amazing. Having said that, the fantasy aspect (when we see the Baron and Shizuku in the fantasy world) is visually stunning to look at, along with the rest of the film. It's a great coming-of-age film that I think many people can relate to, which is why this is such a strong Ghibli film. I highly recommend it.
Read more
3 people found this helpful
Report abuse
See all reviews
Get FREE delivery with Amazon Prime
Prime members enjoy FREE Delivery and exclusive access to movies, TV shows, music, Kindle e-books, Twitch Prime, and more.
> Get Started
Back to top
Get to Know Us
Make Money with Us
Let Us Help You
And don't forget:
© 1996-2020, Amazon.com, Inc. or its affiliates