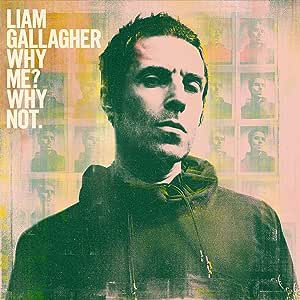 Secure transaction
Your transaction is secure
We work hard to protect your security and privacy. Our payment security system encrypts your information during transmission. We don’t share your credit card details with third-party sellers, and we don’t sell your information to others. Learn more
Details
Ships from
Amazon AU
Sold by
Amazon AU
New (8) from
$32.29 FREE Delivery on first order.

Liam Gallagher’s eagerly anticipated second album Why Me? Why Not. was written by Liam with producers Andrew Wyatt and Greg Kurstin, and recorded in Los Angeles and at RAK Studios in London. Wyatt and Kurstin previously contributed writing and production to Liam’s all-conquering debut solo album As You Were, and Liam was keen to get even deeper with them this time. As a result, Why Me? Why Not. is a clear upgrade on As You Were but not a radical departure. Liam explains: I wrote some songs on my own for the last album, but this time it’s all co-writes. Reason being is I want it to be even better than ‘As You Were’. I know my strengths and I know my limitations. I’m an ok songwriter, but I’m a great singer and frontman. I want the second album to be a step-up because the hardest thing to do is to make something the same, only better. So that’s what we’ve done. Shockwave has seen Liam Gallagher make a typically full-throttle return. Super intimate sold-out show at Hackney Round Chapel? Biblical. Premiere and release of the long-awaited As It Was’ documentary? Completed. Featured on the cover of Q, who described him as rock’s finest frontman? Naturally. Liam Gallagher’s debut solo album As You Were was a critical and commercial smash. It debuted at #1 in the UK and top 10 in Australia. Liam was back where he belonged, selling out huge outdoor shows and earning major awards from Q, NME and GQ. Liam’s next double-bill of huge UK shows comes at the end of the month. He’ll play a sold-out Eden Sessions show on the 26th before hitting Glastonbury’s Pyramid Stage on the 29th.

4.8 out of 5 stars
4.8 out of 5
1,767 global ratings
How are ratings calculated?
To calculate the overall star rating and percentage breakdown by star, we don’t use a simple average. Instead, our system considers things like how recent a review is and if the reviewer bought the item on Amazon. It also analyses reviews to verify trustworthiness.

DW57
2.0 out of 5 stars Cheap vinyl pressing. Forgettable songs that Liam sounds bored singing and has no real soul in.
Reviewed in the United Kingdom on 28 September 2019
Verified Purchase
I bought the vinyl version of this album. The quality of the vinyl is poor. It feels like 120/140 gram vinyl and the cover is a cheap affair. Not good. I hope we're not sliding into crap quality vinyl again to save a few bucks.
The music itself is OK, but uninspiring. 'As you were' was a great album with some verve but this just sounds like an album of musical wallpaper with nothing to convince me that Liam had any input in the songwriting. Too much whining about his 'long lost' brother in the songs that is getting a bit tiring now and a general sense that he is just plodding through songs he doesn't really have any soul in. The lyrics are all a bit arty farty. Rick Astley could've sung most of this album and pulled it off.
Sorry Liam, I think you're great and a real rock'n roll hero but this album doesn't cut it for me, getting through side B was an effort.
The sound quality is compressed, loud and muddled with more than a whiff of auto tune going on.
Oh well, maybe next time.
Read more
15 people found this helpful
Report abuse

Doom Lee
4.0 out of 5 stars Most consistent record in some time. Cracking return from Liam.
Reviewed in the United Kingdom on 24 September 2019
Verified Purchase
In my opinion it’s the most consistent effort Liam has been involved with for some time.

There are some great songs on here. You will have heard the singles which will give you a flavour, as will his previous album and maybe the first beady eye record.

Beatles and Stones......Solo Lennon, solo Macca (Ram and McCartney era), T-Rex and a touch of Slade all find a look in.

The production is quite mellow and polished which is.....erm.....nice......but that’s where we lose a star, a little more dirt and grit would have made this a real stomper a little less Radio 2 friendly. This is a grown up sounding album!

A few tracks are quite forgettable TBH but again I blame the production and it’s quite a brief album so a few times things don’t hang about to sink in. I think it’s a grower though. You need to give this one time.

Gareth
5.0 out of 5 stars Music, lyrics and vocals a masterpiece.
Reviewed in the United Kingdom on 23 January 2020
Verified Purchase
This album will go down in history as one of the greats. Liam's vocals are fantastic, musically it is very clever and the lyrics are brilliant. Collectively it's a masterpiece. Well and truly knocked out of the park. Stratospheric....
Read more
4 people found this helpful
Report abuse

Chirpy
4.0 out of 5 stars Liam hits the heights.
Reviewed in the United Kingdom on 24 September 2019
Verified Purchase
A delight. Strange to say that the weaker tracks are the ones you expect from Liam. The softer, more melodic tracks are superb and as always comparable to the Beatles at their best. Well worth a listen.
Read more
5 people found this helpful
Report abuse

PH
4.0 out of 5 stars A little underwhelmed with the packaging
Reviewed in the United Kingdom on 9 October 2019
Verified Purchase
I'm not rating the songs, I'm rating the quality of the product. I love the album, but I have to say that the outer and inner sleeves are fine but a little underwhelming. The vinyl also doesn't seem to be as heavy as most new vinyl albums. Everything is good enough, but a little disappointed as most new albums are packaged better in my opinion.
Read more
3 people found this helpful
Report abuse
See all reviews
Back to top
Get to Know Us
Make Money with Us
Let Us Help You
And don't forget:
© 1996-2021, Amazon.com, Inc. or its affiliates