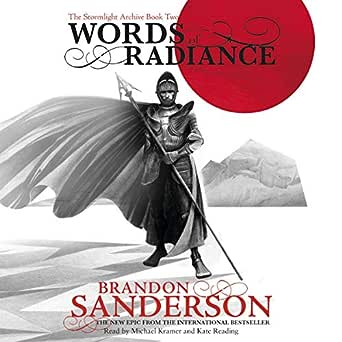 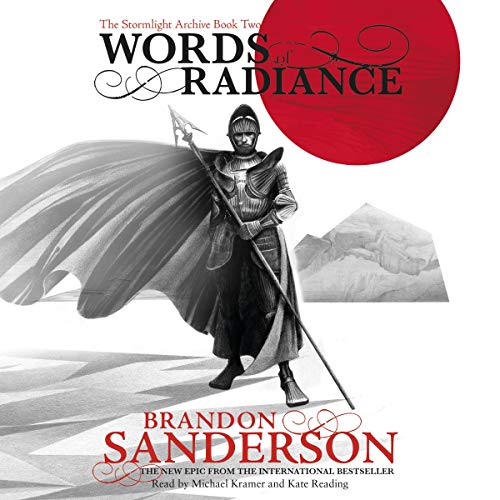 4.8 out of 5 stars
4.8 out of 5
12,608 global ratings
How are ratings calculated?
To calculate the overall star rating and percentage breakdown by star, we don’t use a simple average. Instead, our system considers things like how recent a review is and if the reviewer bought the item on Amazon. It also analyses reviews to verify trustworthiness.

Amazon Customer
5.0 out of 5 stars Phenomenal
Reviewed in Australia on 22 July 2019
Verified Purchase
Brandon Sanderson is a genius. These books create complex worlds that are painted before your very eyes and draw you right into them. The storyline is captivating and keeps you wanting more, despite being over a thousand pages long. There's suspense and surprises; there's deep emotion and there's light-hearted banter. It will make you gasp and it will make you giggle. I don't know how he does it - but he has blown my mind once again. Bring on the next book, I say!
Read more
One person found this helpful
Helpful
Report abuse

Dave, the 4,087th of that name
5.0 out of 5 stars Brandon keeps it coming
Reviewed in Australia on 12 April 2014
Verified Purchase
If you enjoyed the first book of the Stormlight Archives (They Way of Kings) rest assured that the second installment is at least as good. Brandon Sanderson doesn't disappoint in this one, bringing the current story threads to a satisifying climax & resolution, while setting up the next part of the sage very nicely. Almost all the characters from the first book gain depth and realism as more of their history and motivation is revealed. Now all I have to do is find some way to survive until the next book comes out!
Read more
3 people found this helpful
Helpful
Report abuse

Isaac
5.0 out of 5 stars Excellent addition to the series
Reviewed in Australia on 28 January 2020
Verified Purchase
This is an excellent novel and an amazing addition to the series. There is a huge amount of content with over 1300 pages which is packed with text. The world and characters in it continue to grow. Delivering spades in both quantity and quality!
Read more
Helpful
Report abuse

sharyn
5.0 out of 5 stars My new favourite
Reviewed in Australia on 12 April 2014
Verified Purchase
I waited so long for this book that I re-read the first another two times, it didn't disappoint, I just hope i don't have to wait as long for the next
i love having so many POV characters and really interesting anthropological tidbits, characters got a tiny bit shallow in one or two places but that just took my rating from 6 stars to 5.
Read more
Helpful
Report abuse

Cheryl Mathews
5.0 out of 5 stars This book will continue to intrigue fans of this series
Reviewed in Australia on 30 August 2014
Verified Purchase
This series has been exceptional, and this book has kept to Brandon Sanderson's usual high standard. The world he's created is the most imaginative world I've ever read about, and this latest book gives some more tantalising hints about the nature of the world without revealing too much. And our favourite characters are learning about it at the same time as we are. I'm more intrigued than ever and I can't wait for the next installment.
Read more
Helpful
Report abuse

F_Waylander
5.0 out of 5 stars Brilliant read
Reviewed in Australia on 27 November 2018
Verified Purchase
The second instalment picks up with stunning pace. It is hard not to immerse yourself as you travel with the characters as they wrestle with circumstances including their own personal demons. Gripping read.
Read more
Helpful
Report abuse

Amazon Customer
5.0 out of 5 stars A fantastic example of Sandersons skills as a story teller.
Reviewed in Australia on 9 October 2018
Verified Purchase
Unlike book one which was affected by copy edit errors this book is a free flowing, unencumbered experience. As a reader I related to the characters, was enthralled by the mystery and captivated with the imagery.
Read more
Helpful
Report abuse

Andy Sainsbury
5.0 out of 5 stars fabulous
Reviewed in Australia on 13 April 2014
Verified Purchase
Long and wonderful. As satisfying as a three course top notch meal. Will sleep happy and dream of what is to come.
Enjoying the kindle search feature very much to remind myself who's who, and its nice to have artwork i can see and read on the kindle too
Read more
Helpful
Report abuse
See all reviews

Alaran
5.0 out of 5 stars Enthralling epic
Reviewed in the United Kingdom on 11 October 2017
Verified Purchase
The second volume of ‘The Stormlight Archive’ is just as enthralling as the first, if not more so, and continues to develop what has become a thoroughly enjoyable epic.

It concentrates on a few characters, following events from their perspectives. Whereas Kaladin was, perhaps, the more major character of ‘The Way of Kings’ there is more emphasis on Shallan in this book. Thus, we find out much more about her life and background and she becomes more instrumental in events. As in ‘The Way of Kings’ much of the content comes from the perspectives of Kaladin and Dalinar. Though Dalinar this time shares some of the limelight with his son, Adolin, who becomes more of a fully rounded character during the course of this novel.

There is also still the occasional section/chapter from other perspectives, generally through the various interludes. This includes more from the tormented and dangerous Szeth building upon his portrayal in the previous book, a touch of insight into enigmatic Wit and the introduction of Eshonai to represent Parshendi interests. There is also an interlude that opts to focus upon Taravangian where we learn a lot more about him and his objectives, gaining a slight idea of how he fits into the return of the Knights Radiant.

‘Words of Radiance’ continues the superb world building begun in ‘The Way of Kings’. The world of Roshar is further embellished by the continual expansion of its geography and history (both its recent past and ancient myths).

Much like the first book, the bulk of the story is still concentrated around the civilisation of Alethkar and its people’s campaign upon the Shattered Plains. However, there are multiple teasing insights into other areas/states of Roshar that certainly leaves the reader wanting to learn more about these fascinating places and how they might eventually work into the greater story of ‘The Stormlight Archive’.

As with ‘The Way of Kings’ this is somewhat slower in pace than the bulk of Sanderson’s work as it concentrates on creating an in depth and elaborate world. That’s not to say that ‘Words of Radiance’ doesn’t contain some fantastically written action sequences. The last hundred or so pages are particularly gripping, both in terms of action and in the revelations they provide.

The division of the novel into two physical parts in the paperback edition is done at a somewhat better juncture than it was done in ‘The Way of Kings’. Although, it is still apparent that it is a forced rather than natural division, but that can’t really be helped.

An absolutely entrancing and rewarding novel that, like its predecessor, I’m sure I’ll be re-reading once the final volume of the series is published.
Read more
5 people found this helpful
Report abuse

Dan
5.0 out of 5 stars Enthralling
Reviewed in the United Kingdom on 8 March 2019
Verified Purchase
I will remember Words of Radiance as the book that sucked me into this series proper. The first book was very good, but I didn't feel the need to rush out and grab the next one straight away. With Words of Radiance however, I found myself reading it in half the time, immediately buying the third book after finishing it, and eagerly finding more information online about the series. After reading it, I now know there is no escaping the rest of the series for me. I've read the Mistborn series, The Reckoners and The Rithmatist and this is probably my favourite of all of Sanderson's books so far.
Read more
3 people found this helpful
Report abuse

Hugh
4.0 out of 5 stars Like watching Catchphrase.
Reviewed in the United Kingdom on 5 March 2021
Verified Purchase
Finishing book 2 (of an eventual 10) is like being on Catchphrase. A square is being removed each time leading to the answer....but we're only at the end of book 2 so need to be patient.

It's so massive, complex and absorbing and the depth is staggering. I just wish it was slightly more accessible; there are times when it makes Gardens of the moon look like paint by numbers.

I'm still unsure about the nature of Spren, shardblades, the heralds and so on but I think I understand what's going on slightly better. People have already mentioned that Sanderson would rather have you confused than bored and no doubt about it, you will not be bored.

As with the way of kings we follow Kaladin, Dalinar, Adolin and Shallan. It's such a pleasure seeing them all interact and we find out more about the latter's past. This is actually her book and she's great.

But complexity and ambiguity aside this is just amazing, the closing stages of the book are a revelation and I was stunned at some of the reveals.

What an amazing world. enjoy it.
Read more
Report abuse

Jordan Glendenning
5.0 out of 5 stars An excellent addition to Sanderson's world
Reviewed in the United Kingdom on 1 May 2017
Verified Purchase
I think there are only a few writers who manage what Brandon Sanderson has done with this novel. It's not only one of the longest books I have read this year, by a huge margin, but it was completely riveting the entire time.

Words of Radiance is the second novel in The Stormlight Archive, and I read both The Way of Kings and Words of Radiance in the space of about a week, I was obsessed. The characters are fantastic. The world-building is amazing.

Sanderson holds closely to the adage, "Better for me to be confused for 10 minutes than bored for 5 seconds". There are times that you will not know fully the implications of something in the text until much later (some things from book one are resolved in book two, many hundreds of pages later), but this is fine because you know enough to get by until then.

Not only are these two books excellent, but they fit within the larger universe of Sanderson's novels (not all, admittedly, but many). The secrets of the Cosmere are only beginning to unfurl and I cannot wait to find out more.

SGFarhan
5.0 out of 5 stars Intriguing, Captivating
Reviewed in the United Kingdom on 30 December 2020
Verified Purchase
The writer is a genius. I did not realise how big the plot was until the writer started including numerous kingdoms and their side story as well. I searched a bit on google and found that the author has created his own universe and all his different books are set in different realms in that universe. That is really a massive plot and I am going to finish all of his books in those different realms, really excited to see how he combines them to give an even bigger story. I have thoroughly enjoyed this and can safely say that once you start, you won’t be able to stop yourself until you finish it and then off course buy the next one immediately. Great author, great story
Read more
Report abuse
See all reviews
Back to top
Get to Know Us
Make Money with Us
Let Us Help You
And don't forget:
© 1996-2021, Amazon.com, Inc. or its affiliates