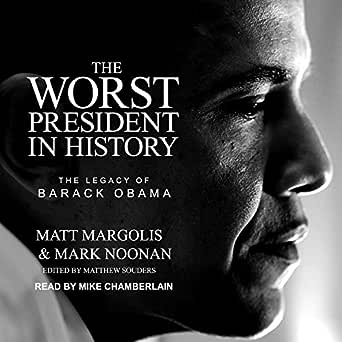 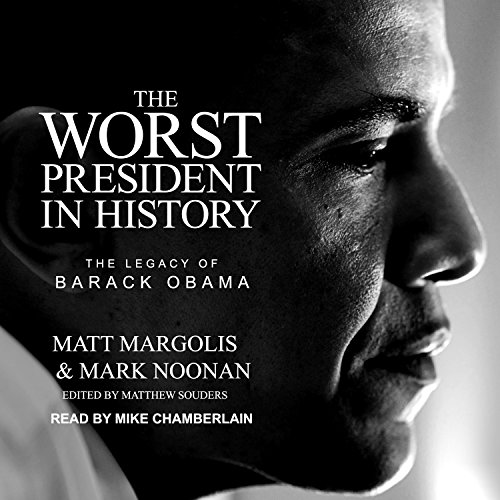 The Worst President in History: The Legacy of Barack Obama

4.7 out of 5 stars
4.7 out of 5
945 global ratings
How are ratings calculated?
To calculate the overall star rating and percentage breakdown by star, we don’t use a simple average. Instead, our system considers things like how recent a review is and if the reviewer bought the item on Amazon. It also analyses reviews to verify trustworthiness.

The Sword
5.0 out of 5 stars What the Left Hates
Reviewed in Australia on 9 April 2019
Verified Purchase
A well written book by a man who used various covert methods to make Islam ultra fashionable and enforce the slow but persistent breeding out of existence societies caucasian male. Also outlines how he is a staunch supporter of radical feminism because it forces the caucasians to battle each other in the family home with the assistance of reinforcing modern paradigms such as white privilege, white guilt, and male privilege.
Read more
3 people found this helpful
Helpful
Report abuse

Alexa
5.0 out of 5 stars Worth reading
Reviewed in Australia on 15 November 2019
Verified Purchase
Valuable insight into a complicated administration and narcissistic man
Read more
One person found this helpful
Helpful
Report abuse

Angelo Barbato
5.0 out of 5 stars In American to a tee!
Reviewed in Australia on 19 April 2017
Verified Purchase
What I suspected but hoped I was wrong. This book spells out the terrible legacy of Obama.
Read more
2 people found this helpful
Helpful
Report abuse

Alisa
1.0 out of 5 stars 0 stars but i could not
Reviewed in Australia on 8 November 2019
rascist book i knew it was from people who thought the creation story is real.such moron garbage.Just do not make books like this if you wanna be a author
Read more
4 people found this helpful
Helpful
Report abuse

gl
3.0 out of 5 stars Quite the reminder!
Reviewed in Australia on 13 May 2019
Nothing new here, of course, but the sheer volume of poor choices, adverse outcomes and anti-American policy is still startling.

The authors manage to write without vitriol despite obviously (and reasonably) disliking their subject.

Kerry
5.0 out of 5 stars Well researched - tons of facts
Reviewed in the United States on 5 November 2018
Verified Purchase
This is a great book from Matt Margolis & Mark Noonan. It's packed with facts that you won't hear from the media. Here's a handful of what you'll find in the book:

Obama nominated John Brennan as CIA Director. This guy is a follower of ISLAM which is counter to the best interests of the United States. Now, Brennan is on the media spreading lies about President Trump.

Obama allowed terror-linked refugees into the US. Obama changed our immigration laws without Congressional authorization to relax restrictions on refugees and asylum seekers. He accepted 10,000 Syrians in 2016 into the US with no screening for terrorism.

Obama negotiated with terrorists and exchanged six terrorists who were being held in a prison, for Army deserter Bowe Bergdahl. He was being held by the Taliban and had coverted to ISLAM.

Under Obama's administration, at least six terrorist attacks happened on US soil. Obama called these acts "workplace violence" or "damaging federal property" instead of what they were, which is terrorism.

Obama refused to link blatant acts of terrorism with radical ISLAM. The shooter, Omar Matee, pledged allegiance to Allah and ISIS before he started shooting people in the Orlando, Florida nightclub. After the couple in San Bernardino, California, who had pledged their allegiance to Allah and ISIS, shot into a room full of people, Obama went on the media to denounce gun violence.

If the authors decide to write another book about Obama, they could write several volumes just listing each time Obama lied about an issue.
Read more
838 people found this helpful
Report abuse

Don
5.0 out of 5 stars An accurate, in-depth account of the Obama legacy
Reviewed in the United States on 12 November 2018
Verified Purchase
Before purchasing, I thought Obama's record could be covered in 40 or 50 pages, but it turned out to be 365 pages, each describing what was either the most confused, or the most corrupt, Presidential administration in history. There is a lasting impression that, given a logical solution to any particular problem, Obama did the exact opposite of what was required. It is only my opinion, but, discounting a deliberate intent to convert the US government to socialism, Obama's actions only make sense if, after receiving the 2009 Nobel Peace Prize, he was operating under the delusion that he could achieve world peace by realigning the US economy, and culture, to conform to an EU-type globalization .
Read more
597 people found this helpful
Report abuse

Darryl Roberts
5.0 out of 5 stars Very interesting read
Reviewed in the United Kingdom on 13 July 2020
Verified Purchase
I learned a lot of facts that the American media has kept hidden from the public.
Read more
11 people found this helpful
Report abuse

Amazon Customer
5.0 out of 5 stars Great source material for further research...
Reviewed in the United Kingdom on 4 January 2021
Verified Purchase
If you were surprised as to why Obama merited a Nobel peace prize, as was he I believe, then you are probably aware of the democrat manipulation of media and judiciary that protected Obama and cohorts from any controversy. This is really a list, acting as a useful basis for doing your own research, material main-stream media will not give you; if you want the truth, you generally have to find it for yourself. If on the other hand you enjoy being propagandised and react emotionally (something propaganda thrives on) rather than employ critical thinking, then you will not enjoy this "list". Yes there is some bias which can be ignored; if you think of how biased most media has been in painting Obama in a positive light then this is not an issue, unless you like to "pick and choose" a bias you favour, forgetting Libya and ignoring the facts, in which case you are probably not interested in the truth anyway.
Read more
2 people found this helpful
Report abuse
See all reviews
Back to top
Get to Know Us
Make Money with Us
Let Us Help You
And don't forget:
© 1996-2021, Amazon.com, Inc. or its affiliates