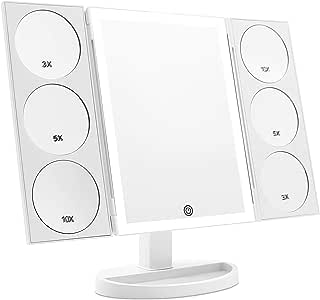 Why We're Better To put it simply, this is the ONLY extra large trifold mirror with dual magnifying panels and 3-color lighting modes on the market today! We challenge you to find another mirror that has all three of these helpful features simultaneously that make putting on your makeup an experience instead of a chore!

A premium mirror with premium features at a premium price. Get yours today!!!

4.3 out of 5 stars
4.3 out of 5
231 global ratings
How are ratings calculated?
To calculate the overall star rating and percentage breakdown by star, we don’t use a simple average. Instead, our system considers things like how recent a review is and if the reviewer bought the item on Amazon. It also analyses reviews to verify trustworthiness.

Indi Smith
1.0 out of 5 stars A disappointing experience.
Reviewed in the United Kingdom on 5 July 2020
Verified Purchase
Ahhh where to begin, I've never left an amazon review before but quite frankly I've never had such a disappointing purchase. So I bought this mirror partly for myself while I wait for a mirror cabinet to be fitted post-lockdown, and also, in the long run for my fiancée to do makeup. The mirror arrived and after unpacking (it was packaged wonderfully) I thought it looked quite nice, it seemed top-heavy and I was concerned about the base, being weighted enough to counter the mirror, which seemed to lean forward precariously, but it seemed ok as long as I angled the mirror upwards slightly which definitely helped! Ok! We're a go.

Upon testing out the lights, they cut after a few seconds. It was a good brightness, enough to see much bettertt when it's not so bright out and to cast a different light on your face but not so much as to blind you, plus the different lighting settings were nice. This was using the supplied cable and a battery pack as I don't have a regular socket in the bathroom. It cut, almost immediately, I tried it with the regular and faster charging port on the pack, nothing. With a different cable, and then wall sockets, nothing, just 3-10 seconds, of light before it shut off. No matter how fast you are doing makeup, even 10 seconds is ridiculous. And it's not that you just had to turn it on again with the on button, I had to physically remove the whole cable and reinsert it just to get it back on. In a last ditch effort to see if it could work, I decided to order batteries, a week later they came with my shopping, I tried them, now nothing worked at all, batteries or cables. I was beyond frustrated.

Well that would have been all, but at least I had a functioning mirror, which was the most important thing, the light was just a bonus. I hate returning things, I'm disabled and due to the current situation don't have help to get out and do things, it's always difficult and painful. I decided that largely this was fine, disappointing but fine. Well after having tested everything, I forgot to angle the mirror backwards, overnight, unprovoked, in a room on its own, on a table with no disturbances, the mirror fell forward onto the desk it was sitting on and cracked. Again still functional but hardly the attractive and useful mirror I ordered.

I'm so frustrated at this whole experience. I should have just tried to return when the lights didn't work, rather than giving them the benefit of the doubt, and now I can't do anything. Maybe I got a faulty unit, physically or electronically, I hope so, because so many other people had such good experiences, but I'd personally avoid this product if you need something easy/simple.

Carla
5.0 out of 5 stars Best mirror I could purchase
Reviewed in the United Kingdom on 11 June 2020
Verified Purchase
I cannot have a cabinet so I needed a mobile solution and this is the best of the kind I have seen. Amazing size, the light is perfect for everything and the magnification mirrors are in different positions in both sizes which means I can use the one lower and my partner can use the other side! It just ticks all the boxes for a mirror. Being able to tilt is just a plus on top of everything else. Being able to close it just means I can make it use less space. Well done.
Read more
One person found this helpful
Report abuse

Amazon Customer
4.0 out of 5 stars Worth the money.
Reviewed in the United Kingdom on 27 May 2020
Verified Purchase
As advertised and delivered on time. Sufficient LUX for its purpose, nice touch with different light colours, and useful to hav an USB cable sent with it.
The folding sides seem a bit flimsy and do not close all the way. Worth the money I would say.
Read more
Report abuse

Louise
1.0 out of 5 stars Not the fairest (or best) of them all
Reviewed in the United Kingdom on 18 January 2020
Verified Purchase
I read other reviews before buying this mirror (which seemed mostly good) and so was quite disappointed when I got this. The lighting is not bright at all and therefore pointless, and even if I wanted the lighting on, it just turns itself off after a minute or so. A waste of money to be honest.
Read more
One person found this helpful
Report abuse

Annabel
5.0 out of 5 stars Best mirror!!
Reviewed in the United Kingdom on 15 July 2020
Verified Purchase
Best mirror!!! Brilliant quality and such a good price. Could not be happier
Read more
Report abuse
See all reviews
Pages with related products. See and discover other items: Top rated in Makeup Mirrors
Get FREE delivery with Amazon Prime
Prime members enjoy FREE Delivery and exclusive access to movies, TV shows, music, Kindle e-books, Twitch Prime, and more.
> Get Started
Back to top
Get to Know Us
Make Money with Us
Let Us Help You
And don't forget:
© 1996-2020, Amazon.com, Inc. or its affiliates