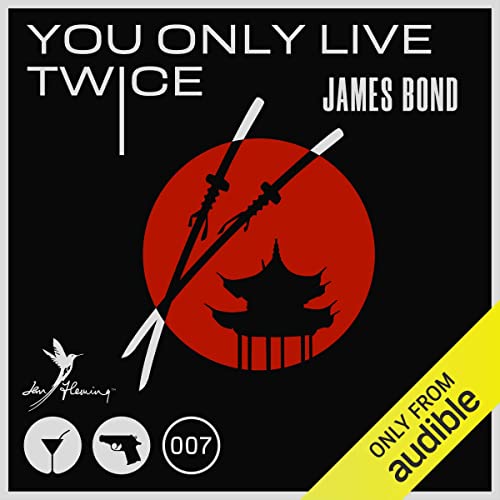 You Only Live Twice

James Bond seems unable to function after the death of his wife. Determined to restore 007 to the effective agent he used to be, M sends him on a mission to Japan, to the mysterious ‘Castle of Death’ and into the lair of an old and terrifying enemy. For Bond and Blofeld, this will be their final encounter. Only one of them can survive.

Ian Fleming was born in London in 1908. He was educated at Eton and worked as a journalist in Moscow and a banker and stockbroker in London before becoming personal assistant to the Director of Naval Intelligence during the Second World War. He wrote his first Bond novel, Casino Royale, in 1952 at Goldeneye, his home in Jamaica. Since then James Bond has gone on to become a global phenomenon.

Martin Jarvis OBE has recorded more than 150 Just William stories for the BBC. These have become international audio bestsellers. He won the Theatre World Award for his starring role on Broadway in By Jeeves; his West End appearances include works by Ayckbourn, Frayn, Pinter and Wilde. Screen successes include everything from Stargate Atlantis, Dr Who and Numb3rs to The Girl with the Dragon Tattoo and the Oscar-winning Titanic.

Switch between reading the Kindle book & listening to the Audible narration with Whispersync for Voice.
Get the Audible audiobook for the reduced price of $3.99 after you buy the Kindle book.
Learn more about membership
By completing your purchase, you agree to Audible’s Conditions Of Use and Privacy Notice.
Sold and delivered by Audible, an Amazon company

3.9 out of 5 stars
3.9 out of 5
11 global ratings
How are ratings calculated?
To calculate the overall star rating and percentage breakdown by star, we don’t use a simple average. Instead, our system considers things like how recent a review is and if the reviewer bought the item on Amazon. It also analyses reviews to verify trustworthiness.

David
4.0 out of 5 stars as advertised hope to use seller again
Reviewed in the United Kingdom on 8 January 2020
Verified Purchase
Just the thing. Slightly spoiled by label on spine.otherwise very good
Read more
Report abuse

Sam Martinez
4.0 out of 5 stars Four Stars
Reviewed in the United States on 30 July 2018
Verified Purchase
Wonderful aroma - will order other products from this company
Read more
Report abuse
See all reviews